Hi everyone! I just realized that I posted this on my Instagram, but I forgot to put it on my blog for all of you too!

This year we had the opportunity to view a Supermoon Total Lunar Eclipse which was super exciting. I know some of you weren’t able to see it from where you were due to poor weather, or your geographical location, so I thought you might like to see it!

The eclipse took place on September 27, 2015 with the blood moon, or full eclipse, lasting for about 1 hour and 12 minutes. People in the eastern and central areas of the United States and Canada had some of the best views of the eclipse. 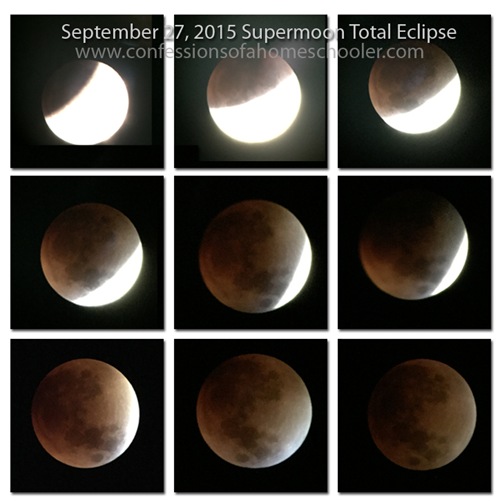 This eclipse was referred to as a Blood Moon because of the red color the eclipse takes on during totality. I’m not sure you can see the reddish hue as well in the photographs, but it was certainly visible in real life!

Turbo and I took all of these pictures over the course of the eclipse using my iPhone to look through a telescope lens. Some were a little blurry, but I think that overall we did a pretty good job at capturing the experience!

I hope you enjoyed seeing this through our lens!