My box pics are mixed up today b/c some of them weren’t as exciting to take photos of, I’ll obviously have spelling, handwriting, math everyday so here are some of the more fun ones… 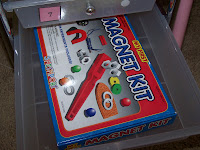 Here’s something I’m actually going to open this and put it on a table labeled “science center”. Just took a photo in the box because there’s no way I could setup a table with this today and NOT have people on it, I want it to be NEW for tomorrow morning 🙂 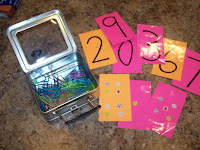 Homemade game of counting and motor skills: I laminated colorful index cards, one side has a number written on it, the other has the correct amount of stickers. Put in a cute box with some colorful paperclips and you’ve got a fun game! This is a WINNER in my house! The tiny lunch box was from some chipboard alphabet I got at Archivers. 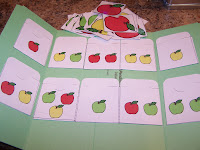 And an apple math game here 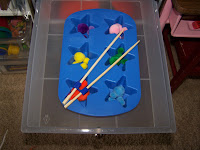 Color sorting with the chopsticks again. Just put in handful of each color pom-poms. I also put little color disks in the bottom of the cups so she knows where to put each color. 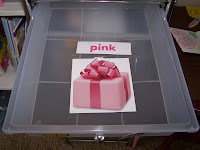 Color scavenger hunt, obviously for my preschooler. Her mission should she choose to accept it is to go around the house with her box and collect anything she wants that is pink. 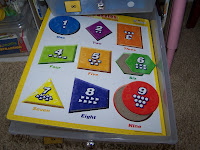 Preschool shapes puzzle, but my 5 year old liked it too, I think cuz it was easy. 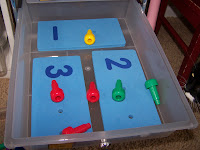 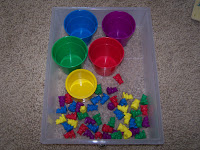 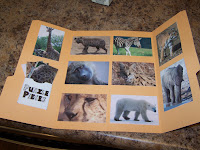 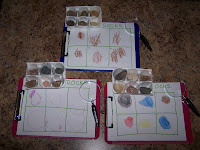 Rock Collecting, Tuesday we took our magnifiers out and found interesting rocks, brought them in talked about them and drew pictures of them. We’re did plants today, Here’s my 2nd graders finds: 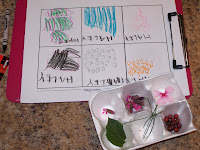 So that’s it for today, we’re definitely diggin’ the workboxes, and though its work for me to put them together the night before (actually, I’ve been doing it in the afternoons after we’re done), the payoff the next day is totally worth it. I’m not running around like a chicken with my head cut off, and the kids stay on task better as well. Also, I’d like to add, that I like having their work spaces seperated out by the carts, keeps them from distracting each other!