I want you all to know that I do my best to only review things that I think will benefit you as my readers, so I thought hard about taking on a movie, however after seeing the trailer, I wanted to give Change of Plans a chance. It’s a part of Fox’s new Family Movie Night where they are  seeking to provide meaningful entertainment for the entire family. 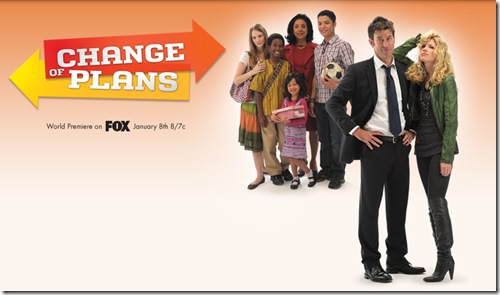 Why a Change of Plans?

With so many shows focusing on  inappropriate issues, it was so refreshing to see an effort to move back towards television where we’re not worried about rushing to change the channel when inappropriate ads or other content comes on. We’re in the habit of not letting our kids watch anything past dinner time, even comedy sitcoms have poor language, suggestive clothing and inappropriate innuendos all throughout them. I’m always convicted by this, why should my husband and I even be wasting our time with something that isn’t clean enough for our kids to watch? Why would we fill our own minds and hearts with this type of media?

What did I think of Change of Plans?

When it first came in the mail, my kids were begging me to let them see it. I told them that I needed to screen it first like I always do. After viewing it, I was so happy to see that I really could let my entire family watch it together. It was truly a family values  focused movie and I’d feel comfortable with even my 4 year old watching.

I have to say that I was very pleasantly surprised. Change of Plans is a touching and heart tugging film that really puts family first.  Not only did it contain humorous moments, but after a long day of being frustrated with my family this film left me a tad teary eyed and thinking about what is really important in life. It is nice to see that kind of programming on air again. Today’s television is filled with so much inappropriate content that it’s almost hard to find things worthy of my time.

So what’s it all about? Here’s the official Movie Trailer:

Sometimes Life Gives You More Than You Bargained For

Up to this point, Sally Danville’s life has played out just as she hoped it would. A beautiful and free-spirited musician, she and her fighter-pilot husband, Jason, live life on the go, free of domestic responsibilities.

But with a single phone call from Child & Family Services case worker, Dorothy (Phylicia Rashad, The Cosby Show), she learns that things don’t always go according to plan. Sally (Brooke White, American Idol) is met with the news that her best friend from college has died in a tragic accident on a Peace Corps mission and has named Sally the legal guardian of her four kids – 3 of them adopted from third-world countries. Now Sally and Jason (Joe Flanigan, Stargate Atlantis) must quickly learn to parent this instant family and help the kids deal with the culture clash of life in America.

The story is both humorous and heartwarming, revealing how fulfilling life can be when you look beyond your own plans and invest in the lives of others.

So if you’re up for some quality family time this Saturday, I would like to highly recommend taking time to sit and watch Change of Plans.

Disclaimer: I received a free screening of Change of Plans for review on my blog. My opinions expressed in this post were not influenced by the free screening or the company.