We are involved in a local Keeper’s of the Faith group, and this month we learned how to knit on a loom. We’ve also tried knitting with needles, but for young kids, this is a very easy way to go! It also goes really fast, which helps to encourage! 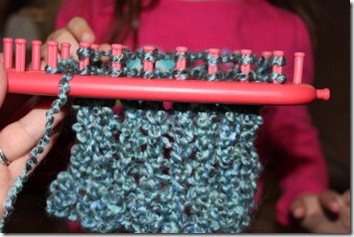 It’s fairly simple once you get started. I realize it’s kind of hard to explain in written form, so here’s a link to a You Tube video if that helps you more.

Step 2: Holding the loom vertically, take the yarn attached to the Skeen, and wrap it around the first peg on the right side of your loom. Make sure to wrap yarn over the top of the peg. Pretend you are climbing up a set of stairs, always step on the top of the stair. 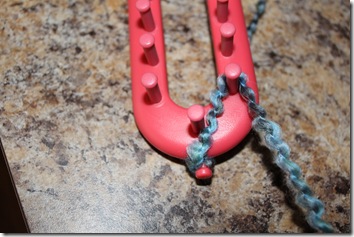 Step 3: Wrap the yarn around the underside of the first peg and across to the first peg on the left side of your loom, again, going over the top of the peg. 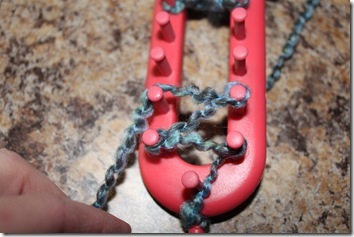 Step 5: Once you reach the end of your pegs, take the thread that has gone over the top side of the last peg (should be on the left side of the loom) and pull it straight across to the opposite side, but this time do NOT go on top of the peg on the right side. Instead, just lay the yarn across the loom and hold the yarn tight. 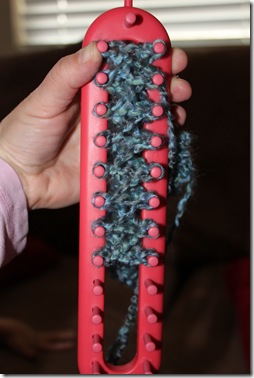 Step 6: Flip the loom upside down and repeat the ladder climbing process until you get back to the top. Make sure to wrap around both bottom pegs, the goal is to get 2 wraps of yarn around each peg. 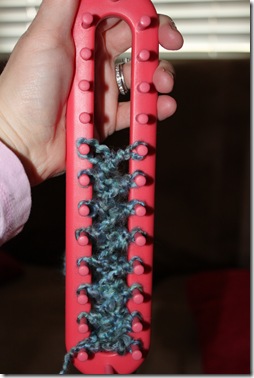 Step 7: You should now have 2 rows of yarn on each peg. Using the included yarn hook, grab the bottom yarn and pull it over the top of the top yarn and off the peg. Now with your finger, slide the left over loop to the bottom of the peg so it is ready for the next round of knitting. Repeat removing the bottom row of loops all the way around your loom. 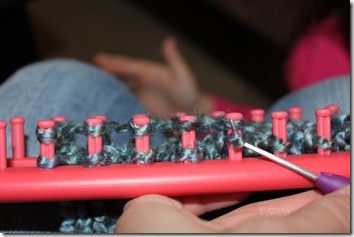 Tip for younger knitters: Using their fingers to remove the bottom row of loops may be easier for younger children then using the hook. My preschooler did great using her fingers, and then I wasn’t worried about her poking herself with the hook! 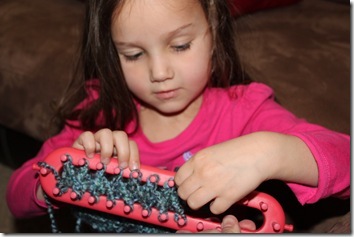 Step 8: Repeat this process of adding on new loops and removing bottom loops until your scarf is the desired length. Note: You only have to make 2 rounds of loops when you first start to get 2 loops on each peg. Once you move past that first 2 rows, you only have to go up the ladder once before removing the extra loop from the loom.

Tip: Make sure to flip over your loom each time so that “climbing the stairs is easier” for young kids to remember. 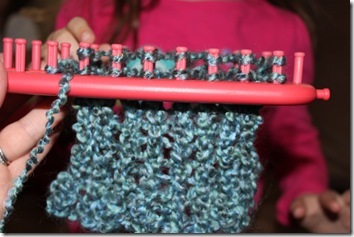 This type of knitting goes quite quickly and was definitely more exciting for my kids to see their progress than needle knitting. Heck, it was encouraging to me!

Casting off: This is difficult to explain, so watch this video tutorial on Casting off with a loom to help you remove your project from the loom.

Embellish: If you would like, add some fringe to the ends of your scarf by tying groups of thread to the ends.

And that’s it! Easy knitting for younger kids, hope you have fun!