Welcome to “What’s in the Box Wednesday” where we’re featuring the Teeny Tiny Tot’s boxes! And since she has been in everything lately I decided to give in and let her get down and dirty with all the prek stuff she’s been trying to steal anyway. So here’s what she found in her boxes this week…

We started off with these Power Magnets and a cookie sheet. She loved this and it actually occupied her for awhile taking on and off the magnets, sticking them together, putting them back in the box. I did sit with her for this though as a few tried to find their way into her mouth. 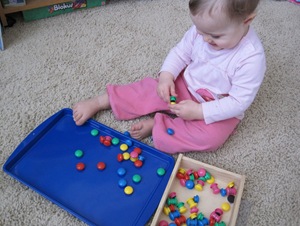 Since we had eggs left over from Easter, I gave her a jar filled with them for her to sort through. She loved pulling them out, putting them back, opening them up and trying to get the lid on the jar. 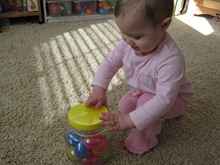 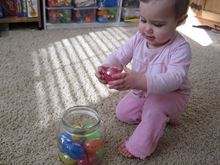 She loves this Fisher-Price: Doodle Pro drawing board, she’s getting better at wielding the pen and just figured out those little shapes draw as well. 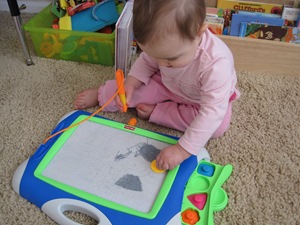 Next we used the Letter Disks for our Prek letter matching games. She had them in a little baggie and spread them out onto the cookie sheet, then put them back in the baggie…then tossed them all over the school room floor. 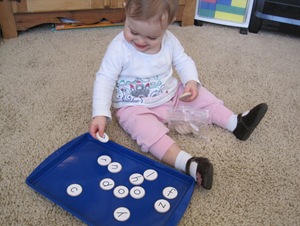 She loves little boxes with things in them, so I gave her this one. (Some scrapbooking supplies I bought came in this cute tin and I kept it for puzzle storage.) I filled it with magnetic letter tiles and put it by the white board. She went to town with the magnets, didn’t even mind that her brother’s new words were written there. 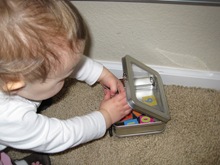 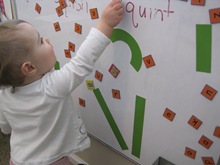 I tried this old wooden Tic-Tac-Toe board that I made when I was younger, she put some of the blocks on, but lost interest pretty fast. 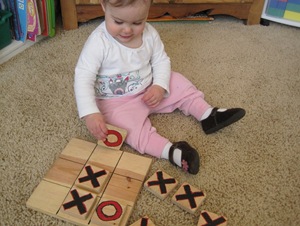 After her sister was done with her shape sorting buttons, the Teeny Tot took over, she loved playing in the buttons, she put some on the cards next to her, but mostly she just dug in and flung them around and giggled. 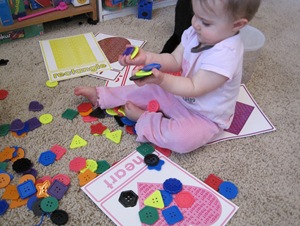 I gave her a tray and some Creative Color Cubes . This didn’t last long, she couldn’t stack them and got frustrated and instead then tried to eat one! 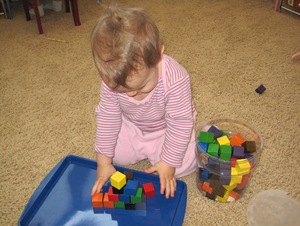 She tried so hard to get these little disks on the pegs, but it was a bit too hard for her to do without my help, she did like playing in them though. This is a math manipulative set from Lakeshore Learning. 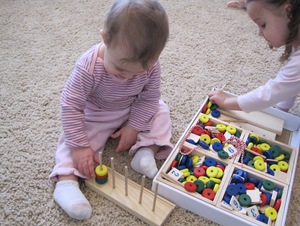 We spent some time putting coffee straws into a jar. Then I thought I’d give her more of a challenge and added the lid which has small holes in it. This was a little too hard, I had to help her out, but boy was she excited when she got one in! 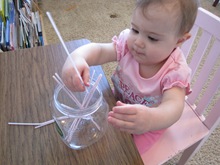 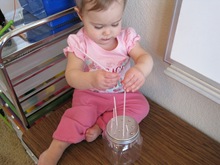 Since the jar went over so well, we decided to put some pom-poms in it as well. She stuffed it, emptied it, put the lid on, and took it off. Then she dumped the pom-poms all over my floor. 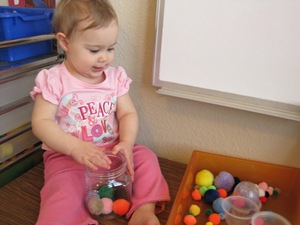 I bought some giant dice from Oriental Trading just to make math more fun. The Teeny Tot watched her brother stack them, then tried it herself. Mostly she just liked to knock it down. 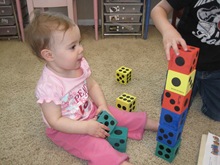 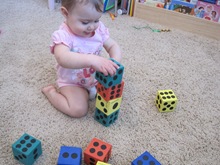 Eventually she hunkered down and started her math… 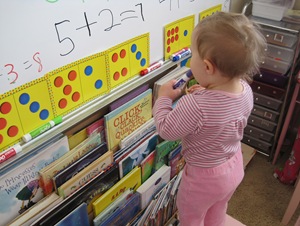 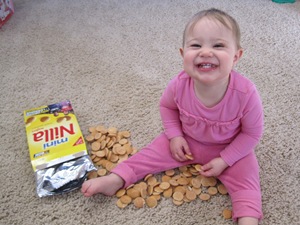 I’d love to see what’s in your boxes today! Don’t forget to link up below!