Welcome to our Teeny Tot Tuesday preschool letter F for Fish activities! This week the Teeny Tot did a great job with her school, she’s getting very official about the whole thing…of course it’s right in time for the end of our year, but that’s okay!

This week she worked on Letter F activities along with some other fun games to help work on her fine-motor skills.

Calendar Time: I think I mentioned on the last Teeny Tot Tuesday post that she was taking over our daily calendar along with the help of her big sister, Tinker Bell. Here she is insisting on doing it herself. She does okay up until about 11 now, but then starts to make up numbers, so we’re working on it. She’s a “do it myself” type of gal, so I think it might be a little…um…challenging…trying to teacher her. 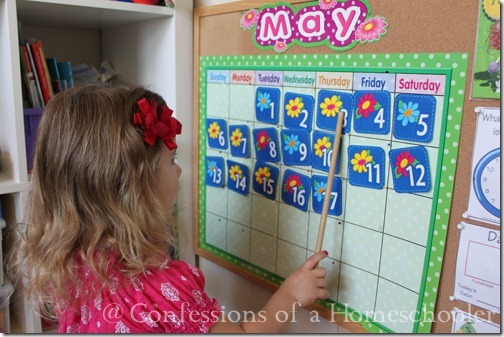 Magnet Activity: I love this activity and so do the kids. We use some power magnets we found on Amazon, but you can really use any magnets you like. I also love the Pom-Pom Magnets from Mama-Jenn. Ours fell apart and I haven’t had a chance to fix them, hopefully I’ll get on that before the Teeny Tot graduates! 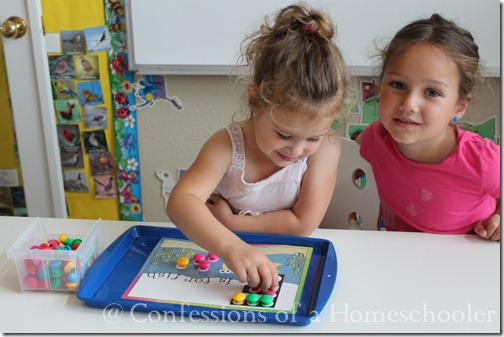 Measuring Activity: The Teeny Tot loved this activity, and it was a new one as well. I gave her some goldfish crackers and had her line them up to measure the fish on her worksheet. Once she was done I had her show me which one was largest/biggest, medium, and smallest or tiny. And of course I let her eat them when she was all done! 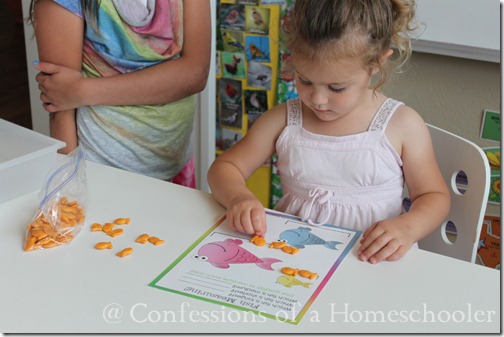 Large Floor Number Activity: We set these out in numerical order. We said each number together as she stepped on them, then I had her to backwards 10 to 1, finally I had her say the color of each fish as she stepped on the cards. It’s a great way to get preschoolers up and moving around while learning number recognition and counting skills! 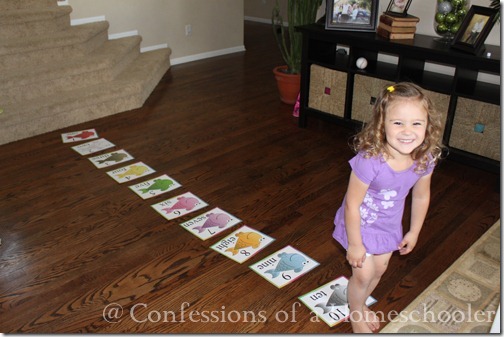 Scissor Skills Activity: All the Teeny Tot had in this drawer was her worksheet and a pair of scissors. When she first started this year, I helped hold the paper, but now she’s able to hold the paper while she cuts. She did a great job on this, the zig-zags threw her for a little loop, but I was happy to see she did a good job on the curve and the square shapes at the bottom. 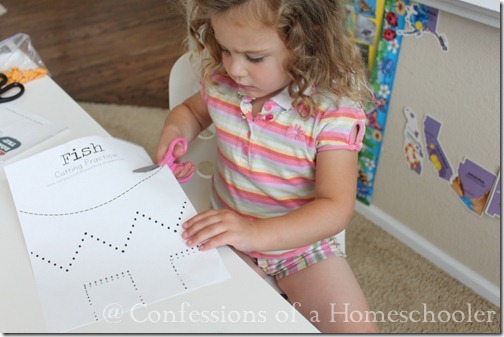 Fish Building Activity: This was a new activity for her. It’s great for building logical thinking skills and spatial reasoning skills too. I gave her the fish game pieces, and told her to try and copy the picture of the fish on the game board. If your kids are younger, just have them put the fish pieces directly on top of the game board. Once they get a little older you can have them do the pattern off to the side. I had to help the Teeny Tot a little to get the pyramid shape, but she did get each layer of fish in the correct position. 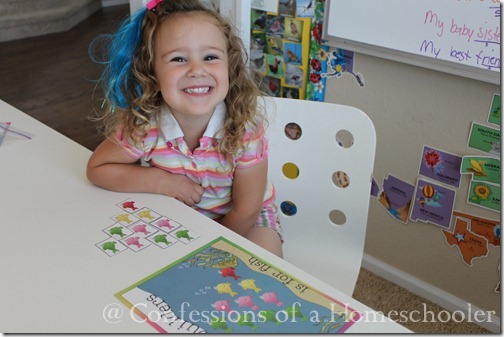 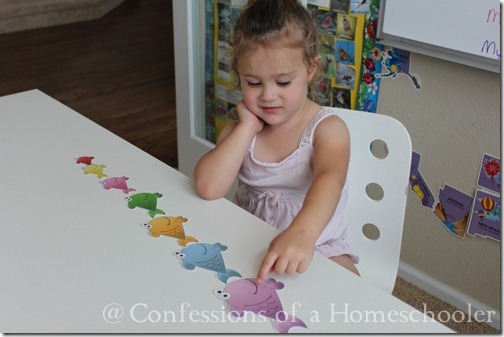 Letter F Color Block Activity: Today I had the Teeny Tot use the same color 1” wooden cubes to line her letter F pieces. Sometimes we have her make patterns, but she doesn’t quite get that concept yet. 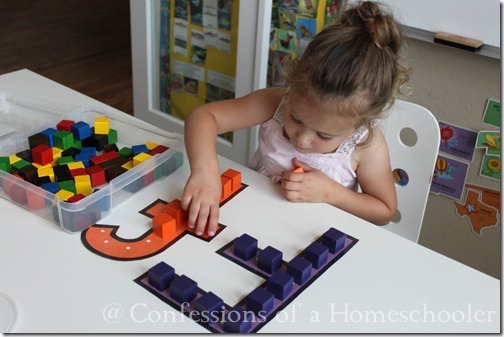 Scavenger Hunt Activity: Strawberry Shortcake remembered this from back when Tinker Bell was doing these activities! She pulled out a drawer and helped the Teeny Tot fill it with things that start with the letter “f”. Her bucket included flip-flops, and gold fish crackers, she also drew a picture of the ‘fridge’ on a piece of paper, I think it’s under the flip-flops so you can’t see it, but I thought it was pretty funny! 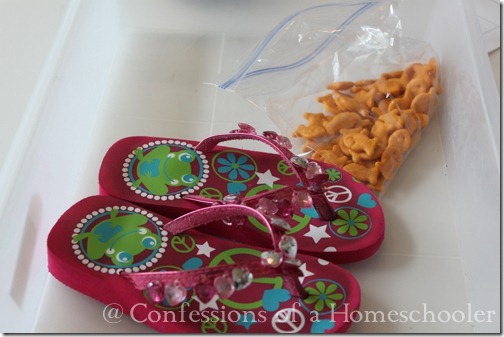 Geoboard by Learning Resources: We haven’t pulled out our Geoboard lately, so I put one in her drawers this week and she had a great time. I normally would have her make the letter of the week using rubber bands, but that’s a little ahead of where she is so I just let her put them on however she wanted to. Either way it’s great fine-motor skill practice. 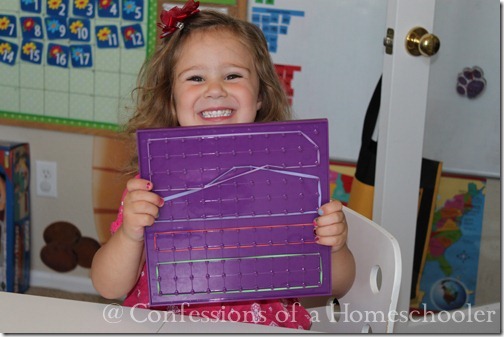 Letter F Do-A-Dot: The Teeny Tot loves her Do-A-Dot pages, as you can see from her focus she takes it very seriously. This activity is great for hand-eye coordination, and one-to-one correspondence. 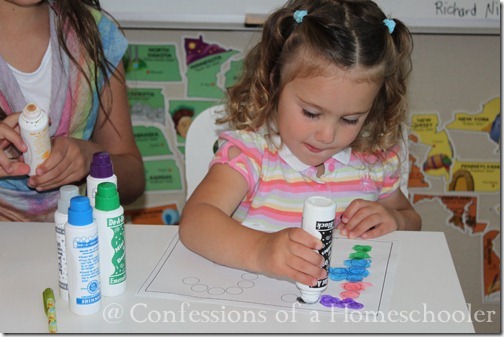 Notice the change of clothes? Yes, she did it twice. What is it with those do-a-dot markers? She loves them! 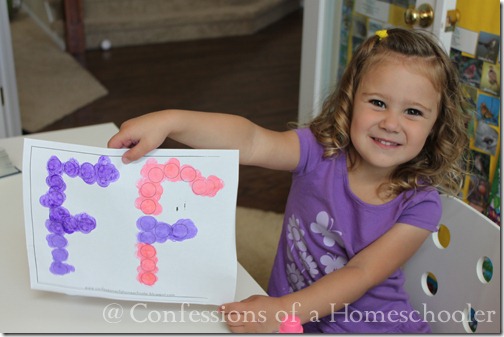 Cut and Paste: Next up I gave her a cut and paste fish activity. She actually did a great job cutting out her fish parts, and was excited to paste them down. I always use glue sticks for little guys since they’re mostly mess free. 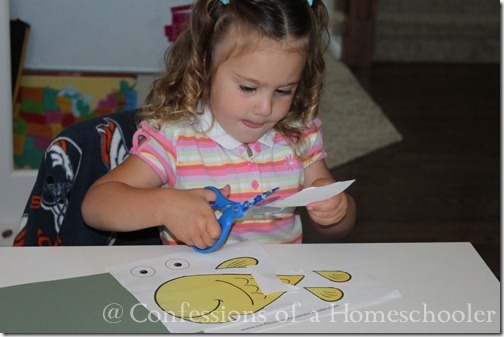 Here is her finished fish, as you can see she’s fairly pleased with her cut and paste skills! I do have to confess I helped show her where to paste the parts, her original fish was a little…um, like Picasso’s cubist era. 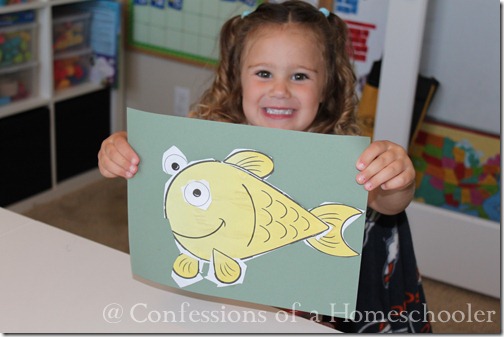 Fish Coloring Activity: The Teeny Tot loves to color, and she’s getting really good at it. Her fine-motor skills are really improving and coloring is a great way to work on those hand muscles needed for handwriting. 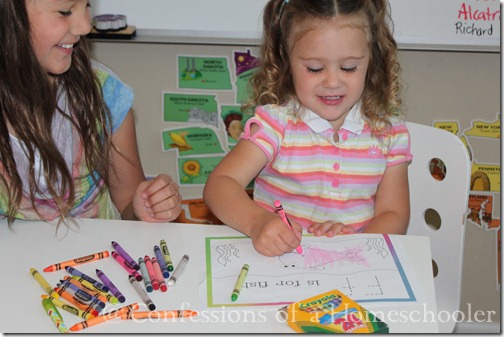 Reading Readiness Game: Next she played with a fun new game we received called Teaching Tiles Early Learning Reading Readiness. The kit comes with word cards, picture cards, and letter matching. Since the Teeny Tot is a newbie at school she did the picture matching cards. 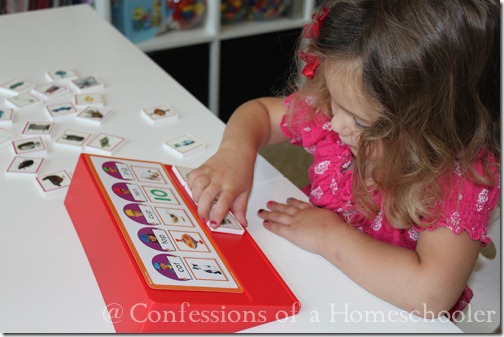 Here is an up-close of the game board: 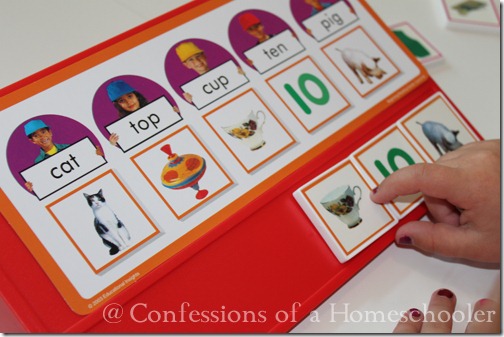