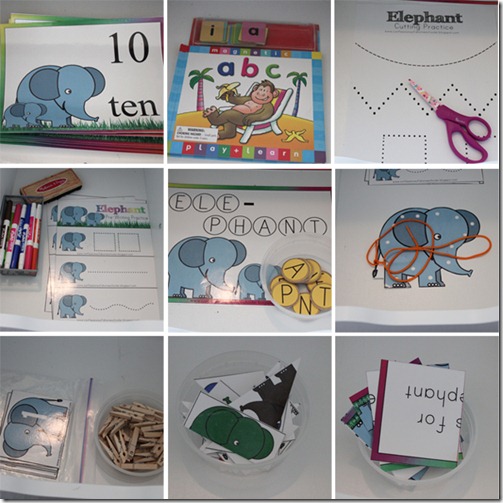 Good morning fellow preschool teachers! Today I have another Teeny Tot Tuesday to share with you, this week we’re working on some Letter E for Elephant activities.

Calendar Time: I recently put the Teeny Tot in charge of our daily calendar (along with the help of Tinker Bell). She is to put up the new day number and then count from 1 all the way to today’s number. Right now, Tinker Bell (or myself) points to each number and says it while the Teeny Tot follows along. This activity is great for number recognition and counting skills. 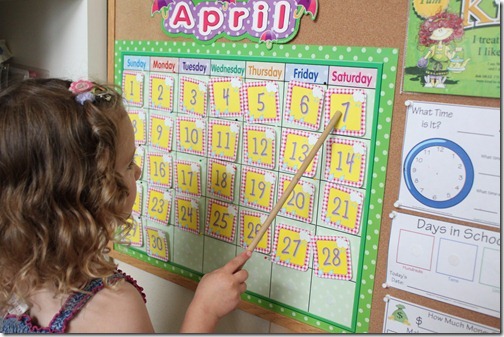 Large Floor Numbers: Once the morning calendar activities are done, she starts in on her workboxes. Right now I’m letting her pick what she wants to do first, so she went for the large floor numbers. We set them out in numerical order normally, but today she insisted on putting them out on her own. Since they were out of order, we said each number together as she stepped on them. It’s a great way to get them up and moving around as well as learning number recognition! 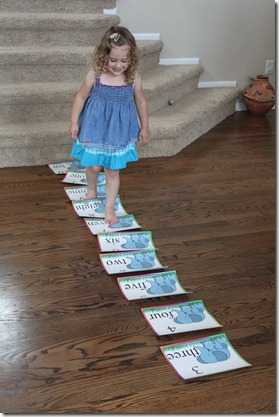 Toot and Otto: Another fun activity we pulled out this week was our Toot and Otto game. This is played like the old time Connect Four game, but with letters “T” and “O”. Instead of playing the game, I asked her to separate them by letter, so she put all of the “T”s together, and all of the “O”s next. 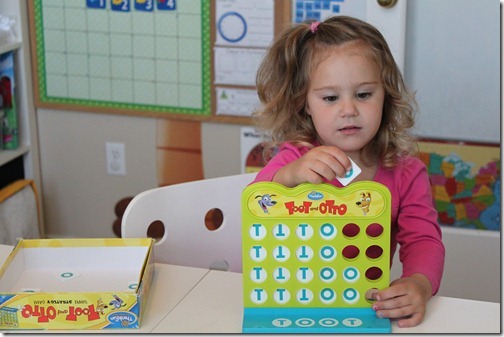 Elephant Lacing Card: Next up is our lacing card. I’m not sure what it is, but this activity seems to be a favorite among all of my kiddos. They actually take turns doing it after the Teeny Tot is done. I was really impressed with her work on this one, she managed to go through all of the holes from the same direction, and in order. I like when I can see progress with these activities. When she first started doing these, she would lace into holes all over the card instead of in order, and her stitches were from top to bottom, and bottom to top with no rhyme or reason. 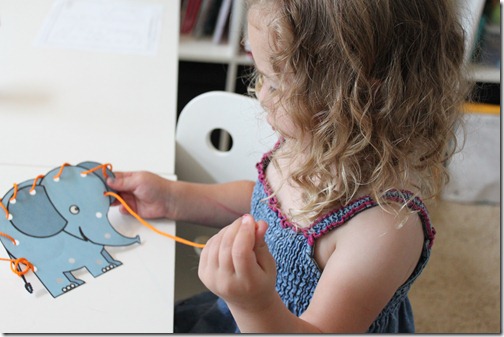 I think she was impressed with herself as well… 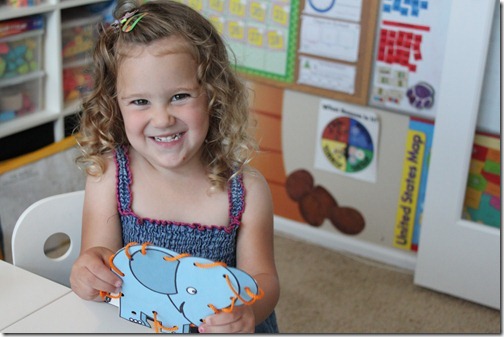 Elephant Number Cards: Right now I’m focusing on numbers 1-5, later on we’ll pull out the rest all the way up to ten. I helped her put the cards in order, then we counted them. Next I instructed her to put one clip on the #1 card, two clips on the #2 card and so on. I helped her count after each clip and she did a great job. 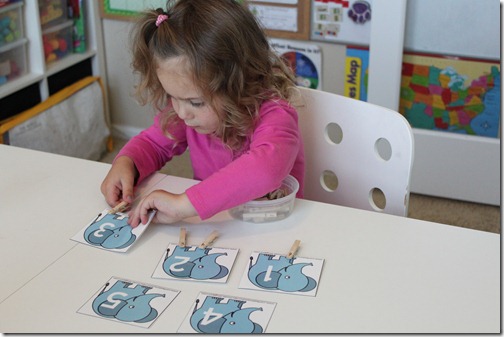 Elephant Pre-Writing Skills: I laminated these sheets back when Tinker Bell used them, so we pull out our dry-erase markers and an eraser and have at it. As you can see below, she was coloring on the lines at first, so once I told her to write along them, she seemed to understand better what she was supposed to be doing. She’s getting much better at this activity, and I’m happy to see that she actually holds the marker correctly, so that will be one battle I don’t have to deal with this time around! Whew! 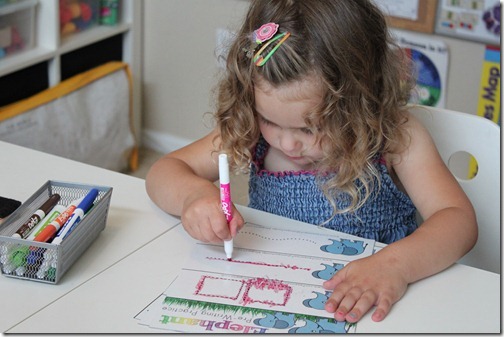 Scissor Skills: All the Teeny Tot had in this drawer was her worksheet and a pair of scissors. When she first started, I helped hold the paper, but now she’s able to hold the paper while she cuts. She did a great job on this, the zig-zags threw her for a little loop, but I was happy to see she did a good job on the curve and the square shapes at the bottom. 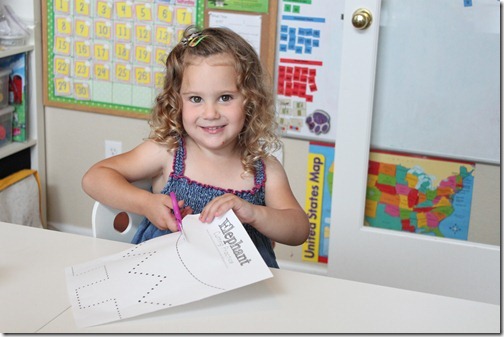 Splash of Color Magnetic Matching: Today the Teeny Tot wanted to play with her color matching game from Learning Resources. She laid all of the paint buckets out, then matched the color pieces to it all herself. Psst…I have a giveaway for this product coming up shortly, so keep an eye out! 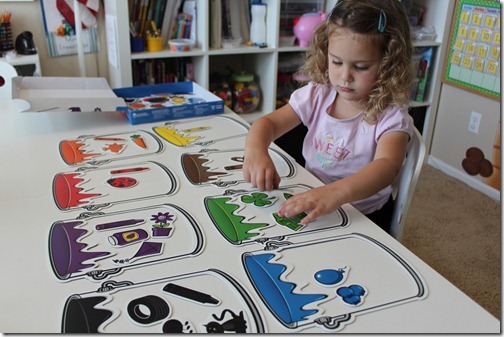 ABC Magnetic Book by Top That: This is a fun letter matching book that we found at a used fair awhile back. There are cute animal pictures and each one has the beginning letter missing. There is a light outline of it, and the pieces are color coted to make it easier to match up. We went through it and emphasized the starting sound for each one…for example “g” for goat. 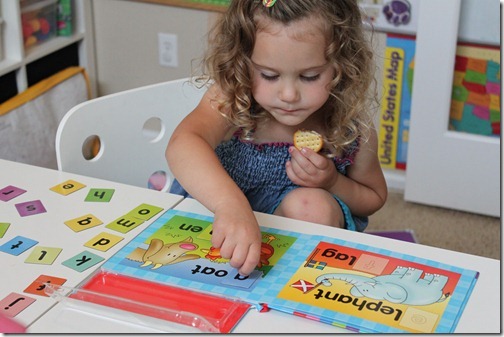 Biggie Beads by Perler Beads: These are always fun, and the Teeny Tot pulls them out often. They’re just like the perler beads for older kiddos, but larger which make them much easier for little fingers. They are great for developing fine-motor skills and you can also sort them by color, make designs, patterns, and shapes. 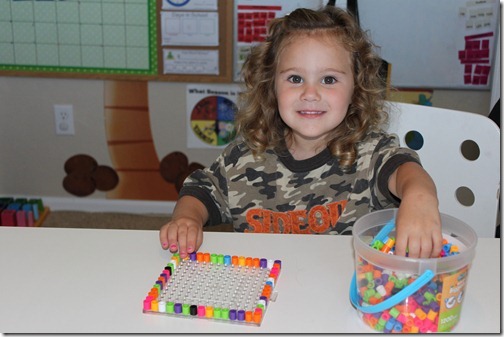 Those are just some of the activities the Teeny Tot did this week, click here to see all of my Letter E for Elephant games! 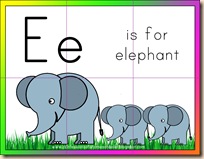