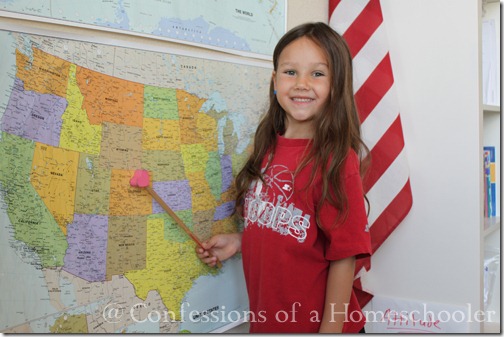 Colorado is in the heart of the Rocky Mountain range. It is nicknamed “The Centennial State” because it entered the union in 1876, just 100 years after the signing of the Declaration of Independence. It has over 50 mountain peaks over 14,000 feet in elevation. The average elevation of Colorado is 6,800 feet above sea level making it the highest state in the United States. Denver is known as “The Mile High City”, and it has 4 major rivers flowing through it, the Colorado River, Rio Grande, South Platte and Arkansas, can you find them on the map? 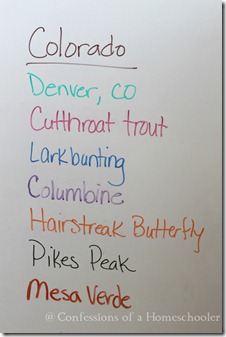 We made designed a postcard from Colorado, and wrote a fictitious letter to a friend. And yes, we have a couple dogs, a cat, and some fish. I think the little yellow guy in the lower right corner would be “Squirt” our hamster. 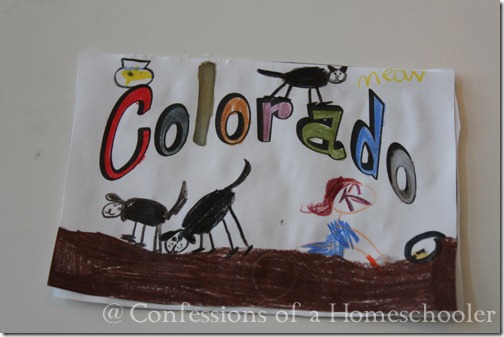 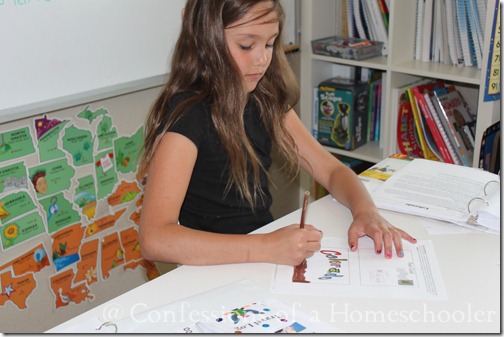 Sorry for the gray boxes on the back side of the post card, but Strawberry Shortcake’s fictitious letter used her real name and address LOL! She has also added a new word to the dictionary…snifted – as in she snifted the flower. 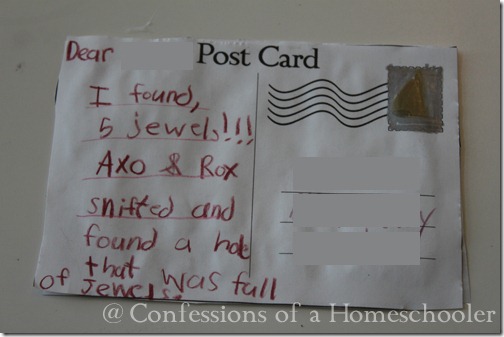 We read through all of the fun facts on Colorado from our Which Way USA Highlights Subscription. If you can, this is a really fun United States subscription. The magazines have fun games, and the fold out you see below has pictures with lots of fun facts along with a full sized map of the state on the other side. 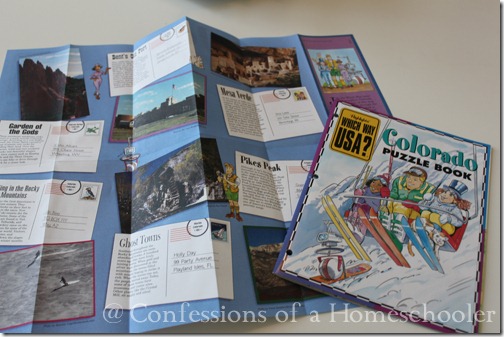 After learning about the animals symbols for Colorado, we classified and added the animals to our USA animal wall! 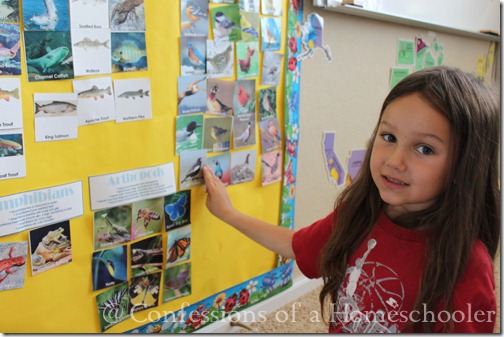 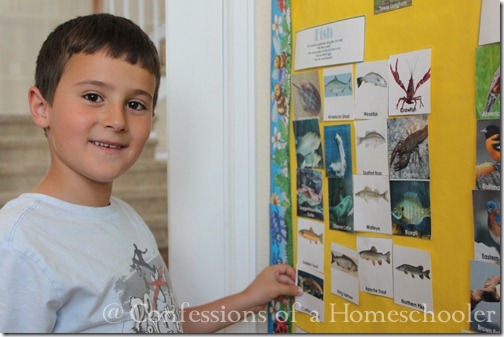 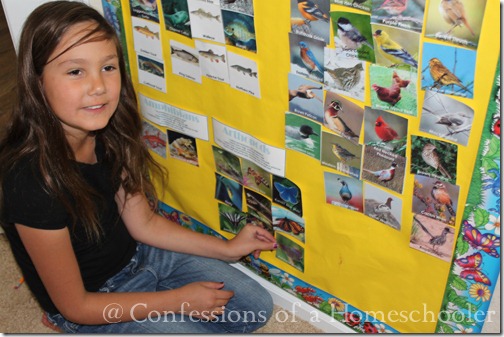 Tinker Bell added Colorado to our United States Bulletin. After that we reviewed all of the states we’ve learned so far on our travels. 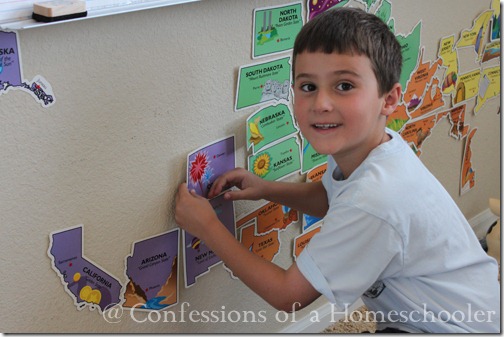 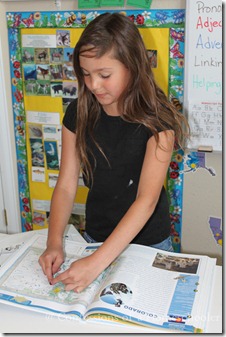 They all completed their state worksheets as we read through all of the Colorado state facts in our curriculum: 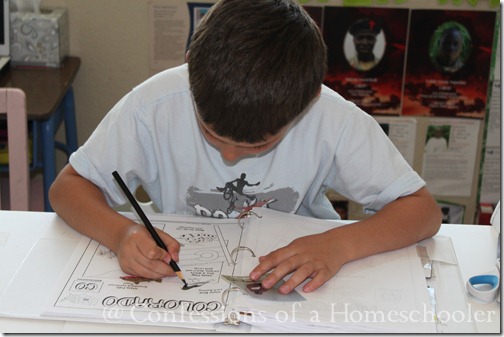 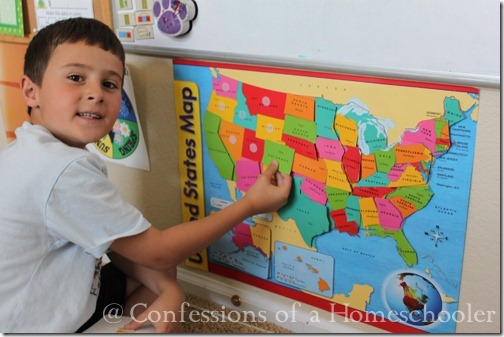 Pikes Peak: Pikes Peak is one of the most famous landmarks in the state of Colorado. It is only 10 miles west of Colorado Springs and is 14,115 feet tall. It is part of the front range of the Rocky Mountains. It was discovered in the early 1800’s by Zebulon Pike. Several adventurers came to Colorado in the hopes of discovering gold in the area and thus came the banner “Pikes Peak or Bust!” The words to America the Beautiful were written by Katharine Lee Bates after visiting the top of Pikes Peak in 1893. Today you can still visit the top by riding the Pikes Peak Railway to the summit. 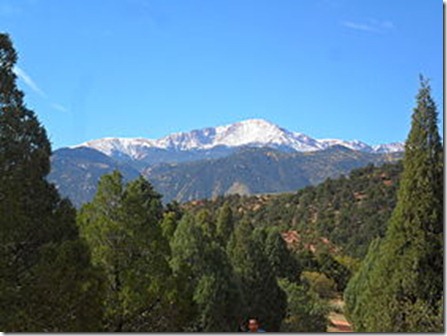 Durango Silverton Narrow Gauge Railroad: Built in the early 1880’s, the Durango and Silverton narrow Gauge Railroad was put in place to carry gold and silver that had been mined out of the San Juan Mountains. The railroad is still in use today but more for tourism. It is a 5 hour ride where you can see the beauty of the Colorado Mountainous landscape up close! For more pictures and information you can visit durangotrain.com 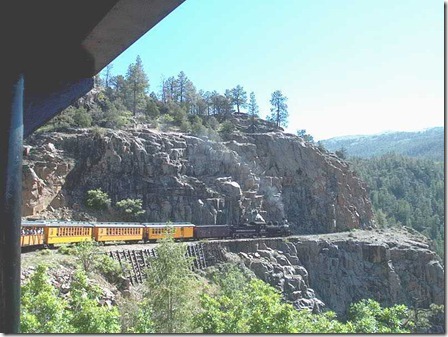 Mesa Verde National Park, located in Montezuma County, CO, was established in 1906 to protect some of the best preserved cliff dwellings in the world. Mesa Verde, Spanish for green table, shows us a glimpse into the lives of the Ancestral Pueblo people who lived there from A.D. 600 to A.D. 1300. Cliff Palace is the largest cliff dwelling at Mesa Verde. It has 150 rooms, plus an additional 75 open areas. The number of Ancestral Puebloans living in Cliff Palace at any one time was about 100-120. 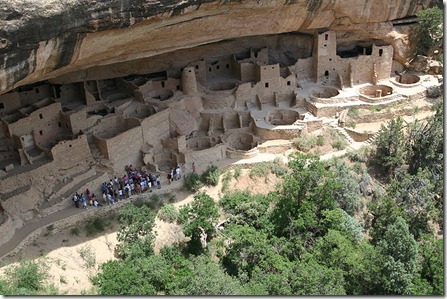 And finally we are still working on the history portion of the curriculum by reading through “If You Traveled West in a Covered Wagon” by Ellen Levine. 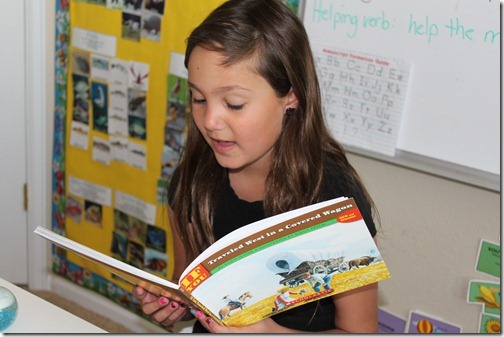 Finally we concluded our week by adding the Colorado state flag to our Travel Log. 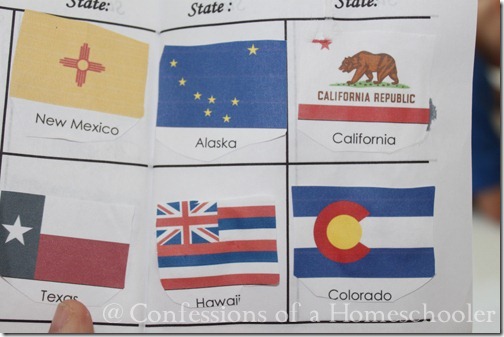 And that wraps up our Colorado study! If you’d like to come along with us on our Road Trip USA journey, click the image below to learn more!