Good morning everyone! We had the pleasure of visiting our local shopping mall during the LEGO Americana Tour this year and wow, was it cool! I was absolutely amazed at these displays. And the designers and builders of these are to be commended because they were absolutely fabulous!

If you weren’t able to attend on of the shows, I thought I would invite you to come along on the tour with us! Each landmark

We’re gonna’ start off with the mac-daddy of the displays…The United States Capitol Building. I wanted to show the girls in this picture just so you could see the size of this thing! It’s absolutely enormous, and took up the entire center of the mall. And make no mistake about it, these displays are equally impressive from the front, sides, and back!

The United States Capitol building is located in Washington, D.C. and is home to the Legislative Branch of the US Government. It seats both the Senate and the House of Representatives. It was first designed in 1793 and completed in 1800. The east face features three sculptures. Over the House of Representatives wing is “The Apotheosis of Democracy”, the Senate wing features “The progress of Civilizations”, and “The Genius of America” sits over the main entrance.

This display also featured a giveaway to whoever could guess how many LEGOS it took to build. Of course we all put in our guesses, and I haven’t found the answer yet, but I’m hoping for a call announcing me as winner soon. 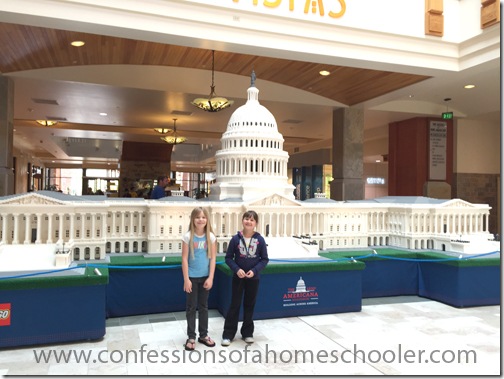 Here is a little more up close detail of the front of the building. The detail is amazing! 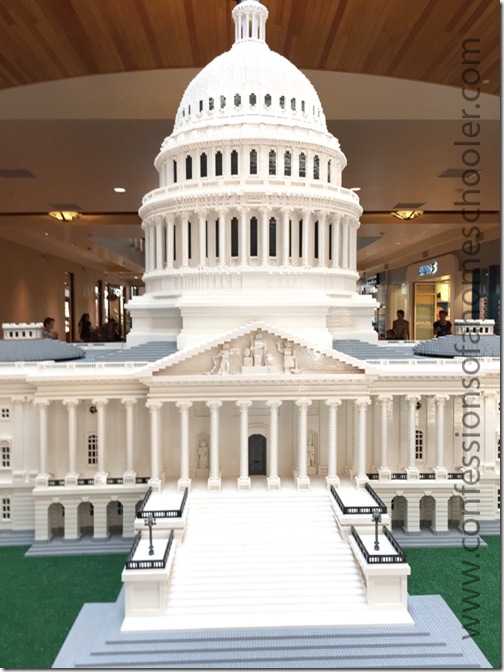 I loved the Liberty Bell display because it was built at a 1:1 ratio which means this baby is life size! It included the “wooden” yoke at 54 inches wide and 49 inches tall. The height from the bottom of the clapper to the top of the yoke is 64 inches and the bell, crack and all, is 52 inches high.

Just like the original, the LEGO bell bears its timeless message: “Proclaim Liberty Throughout All the Land Unto All the Inhabitants thereof”. The bell once rang in the tower of the Pennsylvania State House, which today is known as Independence Hall. Speaker of the Pennsylvania Assembly, Isaac Norris, first ordered a bell for the tower in 1751. The original bell cracked on the very first test ring!

Metalworkers John Pass and John Stow melted the bell down and recast a new. The bell would ring to call lawmakers to their meetings an the townspeople to gather for news. A new crack developed in early 1840 after about 90 years of hard use. The bell was repaired again, but this time workers widened the crack to prevent farther spreading, so the wide crack you now see is actually the repair. Sadly another crack formed up through the abbreviation for “Philadelphia” silencing the bell forever. No one alive today has heard the bell ring freely with it’s clapper, but it still stands as a symbol of liberty to this day! 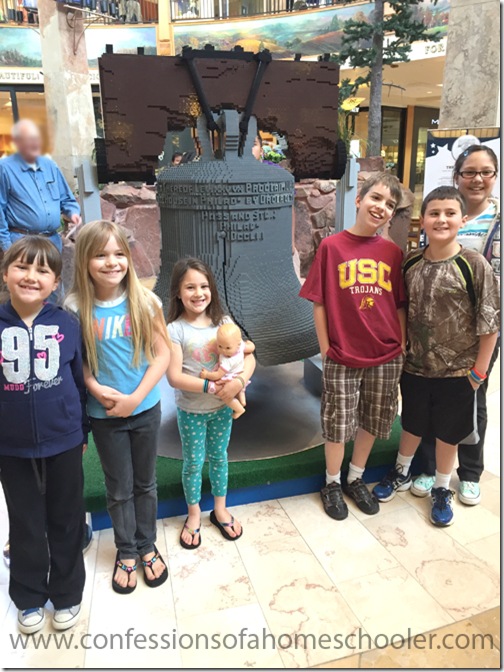 “We hold these truths to be self-evident, that all men are created equal, that they are endowed by their creator with certain unalienable rights, that among these are life, liberty, and the pursuit of happiness.” ~ Excerpt from the Declaration of Independence.

The Independence Hall is located in Philadelphia, Pennsylvania and is the building where the Declaration of Independence, and the United States Constitution were created. It remains an historic landmark to this day. Building began in 1732 and was completed in 1753. It features a central building with a bell tower and steeple totally 176 feet tall. 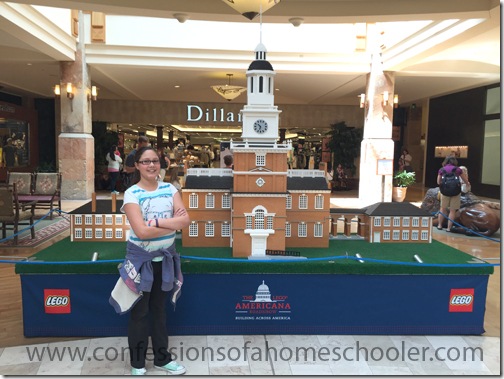 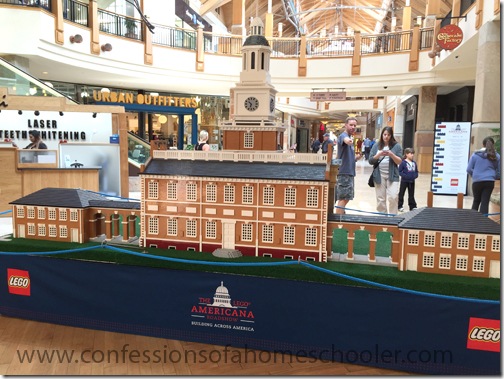 The LEGO Jefferson Memorial is built at 1:51 scale and is 1.8 feet tall. It was built in 230 hours by three LEGO Master Builders. 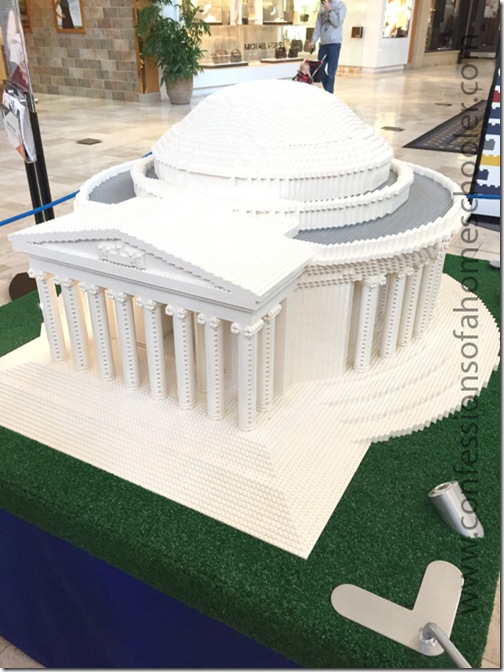 The Washington Monument was constructed to commemorate George Washington, our nation’s first President. It is located in Washington, D.C. an builg out of marble, granite, an bluestone

It was designed by Robert Mills and completed by Thomas Casey and the U.S. Army Corps of Engineers. There was a period of time from 1854-1877 where construction was halted due to a lack of funds, an the Civil War. But it was finally completed in 1884. The building was the tallest building in the world upon its completion.

Today, it remains the tallest stone structure in the world at 555 feet 5 1/8 inches tall. And now features fifty flags around the base, representing the fifty states of the United States. 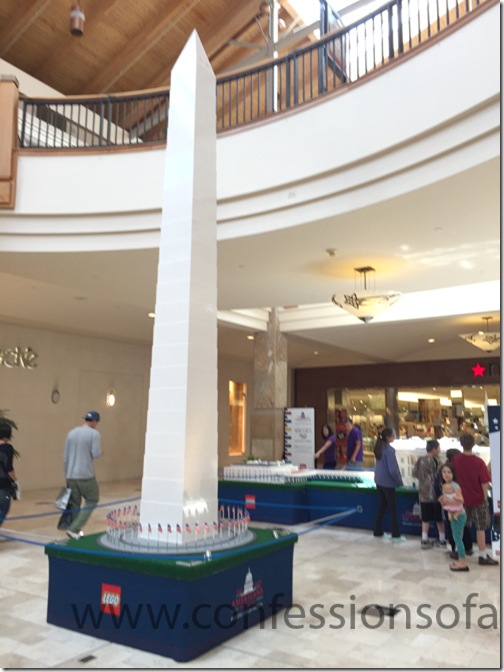 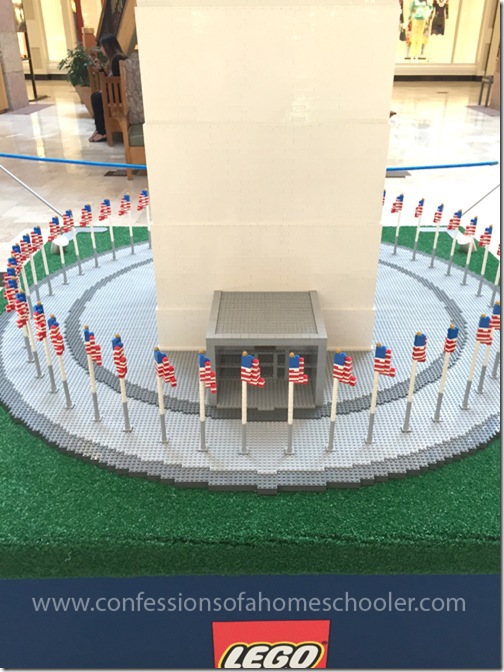 The White House in Washington, D.C. is home to the Executive Branch of the US Government.  It is the official residence of the sitting President of the United States and the First Family. It has been the residence of every US President since John Adams in 1800.

The West Wing was added in 1901 during Theodore Roosevelt’s term in office and William Taft expanded it by adding the famous Oval Office eight years later. The East Wing as it exists today was added in 1942 and serves as offices for the First Lady and hosts many social functions. 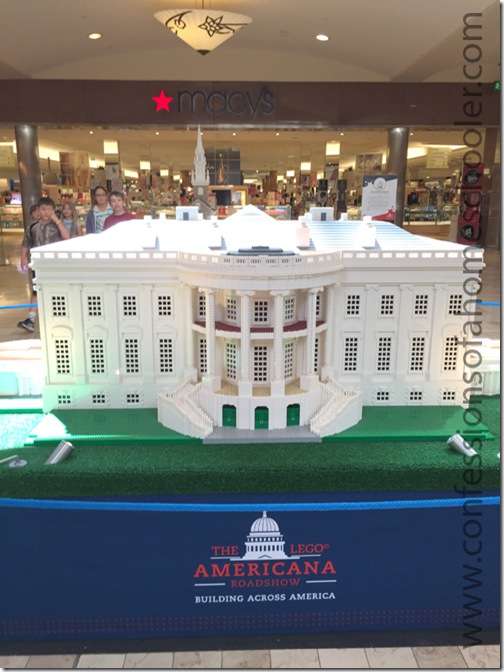 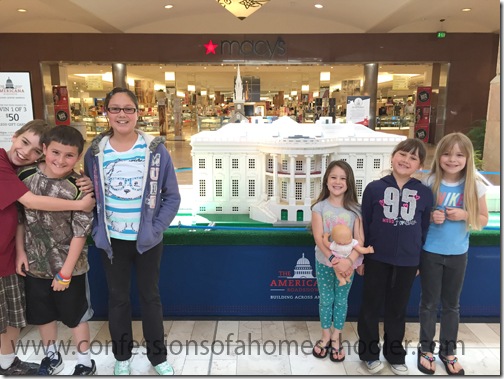 The Old North Church in Boston’s historic North End, is the oldest church in Boston. On April 18, 1775 it signaled the start of the famous midnight ride of Paul revere where the phrase “one if by land; Two if by sea” was made famous. Revere rode across the country side to warn the colonist militia of a raid by British Troops. The militia are referred to as “the minute men” for their ability to be ready at a “minute’s notice”.

President Gerald Ford visited the Church in 1975 in honor of the United States’ bicentennial celebration. Following his speech, two lanterns were lit in honor of Paul Revere’s ride, an then Ford lit a third, which still hangs in the Church today. Eight change ringing bells were hung in the Church in 1745, and are still rung today by the Massachusetts Institute of Technology Guild of Bellringers. The steeple is the tallest steeple in Boston at 191 feet tall. 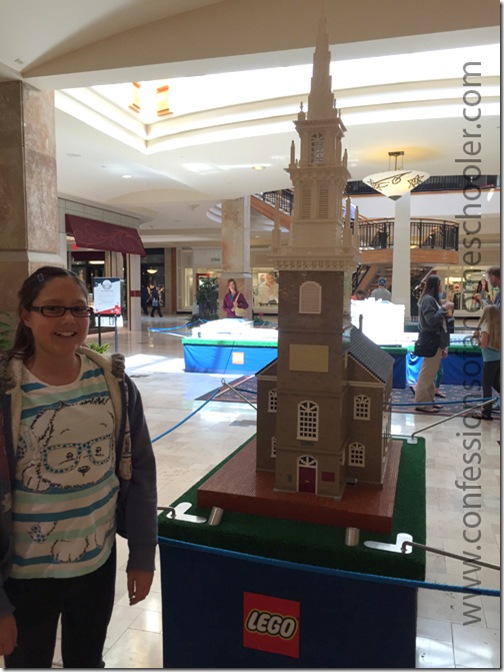 The Statue of Liberty was gifted to the people of the United States from the people of France in 1886. It stands on Liberty Island in the middle of New York Harbor as a symbol of welcoming and freedom.  The statue was designed by French sculptor Frédéric Auguste Bartholdi and depicts the Roman goddess of Freedom, Libertas, who bears a torch, and a tabula ansata (tablet evoking the law) upon which is inscribed the date of the American Declaration of Independence, July 4, 1776. A broken chain lies at her feet. It stands as an icon of freedom and of the united States, and was a welcoming sight to immigrants arriving from abroad.

The original statue stands 305 feet tall from the foot of the pedestal to the tip of the torch. The LEGO Statue of Liberty is built at 1:25 scale and is over 9 feet tall. It took 320 hours to build by Three Lego Master Builders. 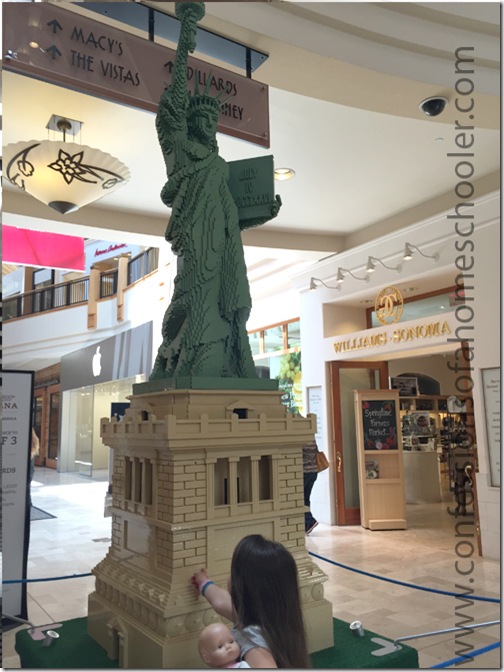 The Supreme Court building in Washington, D.C. is home to the Judicial Branch of the US Government. It was completed in 1935 and is the final, permanent meeting spot for the Supreme Court of the Untied States.

The building consists of mainly marble coming from Vermont, Georgia and Alabama. The courtroom itself is lined with Spanish veined marble. The courtroom’s 24 columns are built with special marble from quarries near Sienna, Italy. The west facing side of the building, which is the front, bears the inscription “equal justice Under Law”. The opposite side has “Justice, the Guardian of Liberty”. Two statues flank the entrance to the building, the one on the left is called “The Contemplation of Justice” and is a statue of a female supported by the book of justice under her left hand with a figure of blindfolded justice in her right. The statue on the right is “The Authority of Law” and is a male figure supporting a law tablet backed by a sheathed sword.

The LEGO Supreme court is built at 1:54 scale and is almost 10 feet long. It was built in 450 hours by Three LEGO Master Builders. 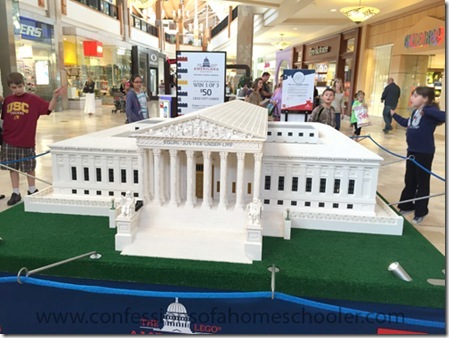 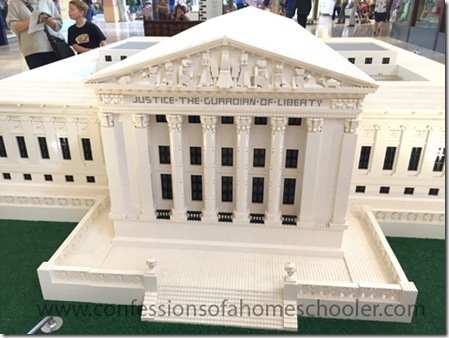 The Lincoln Memorial is located in Washington, D.C. Construction began in 1914 and was completed in 1922. There is a 19 foot statue of Abraham Lincoln inside of the entrance. The memorial has been the host of several famous speeches, from Lincoln’s own Gettysburg Address and his Second Inaugural speech, to Martin Luther King, Jr.’s I have a Dream speech. it is a top tourist spot with approximately six million people visiting each year.

The LEGO Lincoln Memorial is built at 1:25 scale an is 8 feet wide. It was built in 475 hours by four LEGO Master Builders. 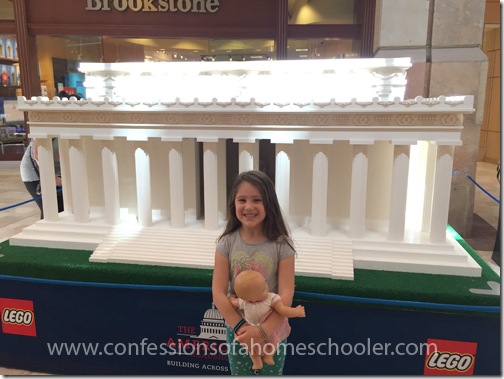 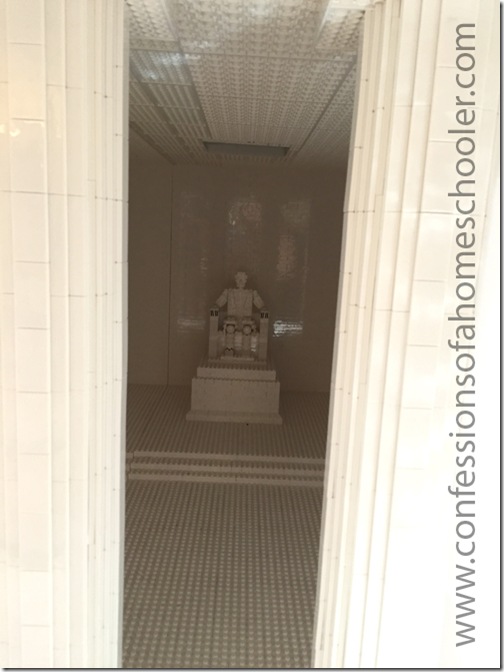 And that’s it for this LEGO Americana Tour! I hope you enjoyed these, and even better yet, I hope you had a chance to check them out for yourself! They were quite spectacular, and the detail was absolutely amazing!