I’m always looking for fun educational reading for my kids, so I was totally excited when I was contacted to review the Imagination Station adventure series! 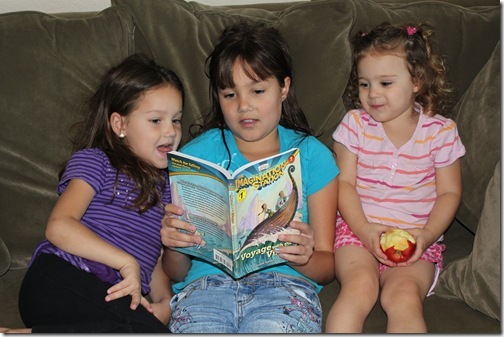 I was equally excited to see my kids jump at the chance to read them!

The Imagination Station series is a historical fiction adventure series for young readers, published by Tyndale House and Focus on the Family. These books were created by the same people who created Adventure’s In Odyssey, so  knew they’d be great! Think “Magic Tree House” but from a biblical perspective!

Here are some details from the publishers:

Travel back in time and sail with the Vikings, meet a Roman emperor, come face-to-face with China’s Kublai Khan, and experience a host of other historical adventures in the  Imagination Station series for young readers. Written for early readers, ages 7 and up, the series features the virtual reality device the Imagination Station, which is one of the major plot devices used in the Adventures in Odyssey audio drama series. Nobody knows the inner workings of the mysterious device, invented by Odyssey’s Mr. Whittaker, but with a push of a button, it launches users back in time to experience historical events in-person.

They currently have 12 books contracted so far, with book #7 coming in January 2012 and #8 coming in May 2012! Since my kids are excited to  go through the whole series we decided to start with book 1 Voyage with the Vikings.

In the Voyage with the Vikings, cousins Patrick and Beth are visiting Mr. Whittaker at Whit’s Soda Shoppe when they find a mysterious letter in the Imagination Station requesting a Viking sunstone.  Whit sends the kids back to Greenland circa 1000, where they meet Vikings Erik the Red and Leif Eriksson.

Each book features a new adventure for your children to experience! 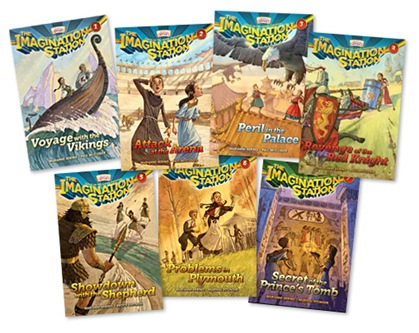 Would you like to win a set of these fun sets for your own family? I just happen to have a set to giveaway to one of you! Guaranteed to make learning more fun!

Win It: {THIS GIVEAWAY IS NOW CLOSED}

Additional Optional Entries: (Not required to win, but give you extra chances!)